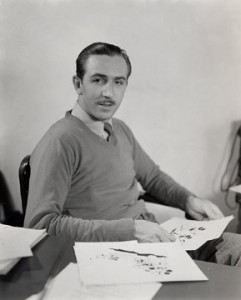 Walt Disney has become a 20th century icon. Like many mythic American figures, he had a humble beginning, an ambitious entrepreneurial spirit, and a passion for modern technology. Walt Disney was born on December 5th, 1901 in Chicago Illinois, to his father Elias Disney, and mother Flora Call Disney. Walt was one of five children.

After Walt was born, the Disney family moved to Marceline Missouri where he spent most of his childhood. Walt had developed an interest in art early in his age. He would often sell drawings to neighbours to make extra money. He pursued his art career, by studying art and photography at McKinley High School in Chicago. He enrolled at the Kansas City Art Institute at age 14.

Walt began to love, and appreciate, nature and wildlife, and family and community. While his father probably didn’t take his son’s interest in art very seriously, he was encouraged by his mother and older brother, Roy, to pursue his talents.

During the autumn of 1918, Disney attempted to enlist for military service. He was rejected because he was under age, only sixteen years old at the time. Instead, he joined the Red Cross and was sent overseas to France, where he spent a year driving an ambulance and chauffeuring Red Cross officials. Instead of stock camouflage, his ambulance was covered with Disney cartoons from front to back.

Once Walt returned from France, he began to pursue a career in commercial art. He started a small company called Laugh-O-Grams, which eventually went bankrupt. Undaunted, he took a suitcase and twenty dollars and headed to Hollywood to start anew.

After making a success of his “Alice Comedies,” Walt became a recognised Hollywood figure. On July 13, 1925, he married one of his first employees, Lillian Bounds, and they later had two daughters, Diane and Sharon.

In 1932, around the time when Walt turned 30, the production entitled Flowers and Trees (the first colour cartoon) won Walt the first of his studio’s Academy Awards. In 1937, he released The Old Mill, the first short subject to utilize the multi-plane camera technique.

On December 21st, 1937, Snow White and the Seven Dwarfs, the first full-length animated musical feature, premiered at the Carthay Theater in Los Angeles. The film was produced at the unheard cost of $1,499,000 during the depths of the Depression. This film is still considered one of the great feats and imperishable monuments of the motion picture industry. During the next five years, Walt Disney Studios completed other full-length animated classics such as Pinocchio, Fantasia, Dumbo and Bambi. 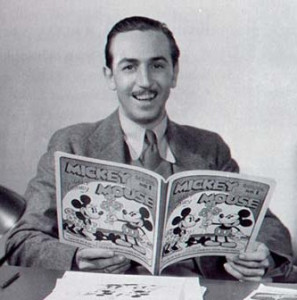 Walt Disney’s dream of a clean, and organised, amusement park came true when Disneyland Park opened in 1955. Walt also became a television pioneer – He began television production in 1954, and he was among the first to present full-colour programming with his Wonderful World of Colour in 1961.

During his heyday, Disney was awarded 29 Oscars for his films, and, by the 1960s, he had become the king of American entertainment. But many felt the quality of his work was in decline; the animation was not as rich, and he did not produce as many shorts. His live-action films, with a few notable exceptions — such as Mary Poppins (1965) — were also becoming routine, and had a hastily made feel to them. Still, he remained a beloved figure. So when he died of acute circulatory collapse following the removal of a lung tumor on December 15, 1966, the world paused to mourn his passing. His legacy lives on in a whole new generation of Disney animated features, including The Little Mermaid (1989), Beauty and the Beast (1991), The Lion King (1994), and The Hunchback of Notre Dame (1996)

Many regard Walt Disney as a true American legend; a folk hero of the 20th century.